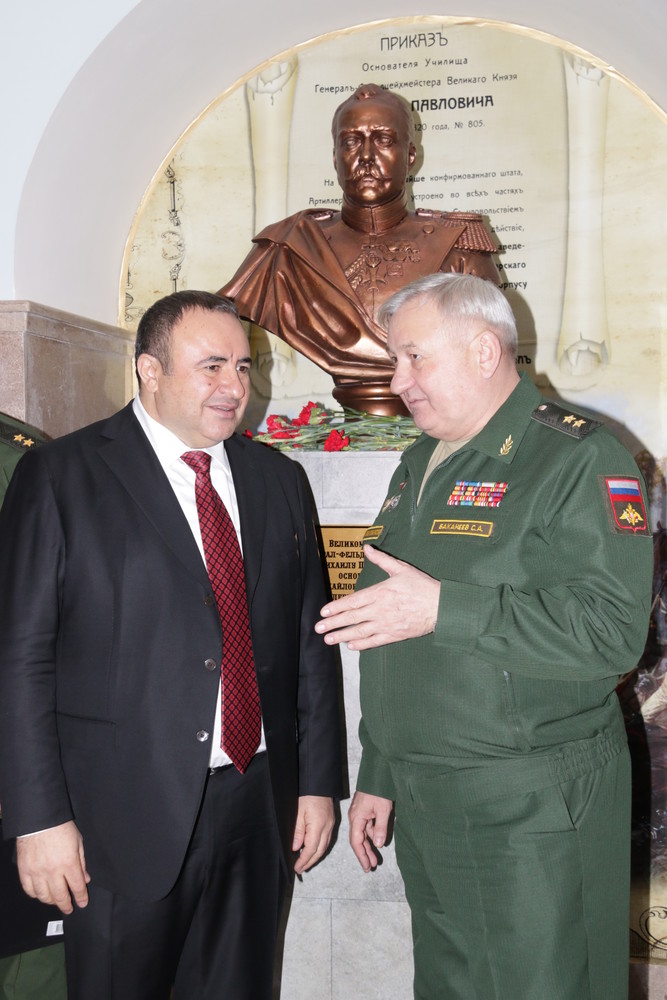 On 6 December the bust of the founder of the Academy Grand Duke Mikhail Pavlovich Romanov was unveiled in the central hall of Mikhailovskaya Military Artillery Academy. The bust was made by the sculptor Igor Senin and its creation was funded by the Grachya Pogosyan Charitable Foundation
This year the Artillery Academy celebrates its 198th anniversary. So, the administration decided to install a bust of its founder at the Academy to honour the event.
Having a long-term friendly relationship with the philanthropist, Lieutenant General Sergey Bakaneev addressed Grachya Pogosyan for support of their initiative as he had already funded the unveiling of plaques to commemorate the graduate of the Academy, Major General and an artist Nikolay Yaroshenko and Marshal of Artillery Vladimir Mikhalkin. Grachya Misakovich considered it his duty to respond positively and the Charitable Foundation realized the project of the creation of a bust of Mikhail Palovich.
NOTE:
Mikhail Pavlovich was Grand Duke in the Romanov dynasty, a military officer and a statesman.  He was the son of Emperor Pavel I and Empress Maria Fedorovna. Ha was a brother of Emperor Alexander I, Emperor Nikolay I and Grand Duke Konstantin Pavlovich. In 1824 he married Grand Duchess Elena Pavlovna. Mikhail Pavlovich was brought up under the supervision of the earl M.I. Lambsdorff and got military education.  In 1819 virtually assumed directorate of the Artillery Department.  By birth was granted the rank of Feldzeichhmeister General. In 1820 he founded the Artillery school that got his name in 1849 – Mikhailovskaya Artillery School, later, on the basis of the classes for commissioned officers, Mikhailovskaya Artillery Academy was created. In 1821 Technical Artillery, Battery and Divisional Schools were founded. In 1824 he was assigned Chef of the Life Guards of Moscow Regiment, in 1825-1826 he served as Chief of the 1st Guards Infantry Division. He contributed to the establishment of 8 new cadet schools. He supervised the construction and back fitting of fortifications in Kronstadt, Dünaburg (now Daugavpils), Kiev, Bobruisk, Sevastopol, Ismail, and also Warsaw Citadel, Brest Fortress and Novogeorgievsk Fortress (Modlin). He led the preparation of the Hungarian campaign in 1849. He died on 28 August (9 September) in 1849.
The unveiling of the bust took place during the 53rd International Military Science conference held by the Academy on 6 December.
The chief of the Russian Missile Troops and Artillery, Lieutenant General Mikhail Matveevsky, Artillery veterans, soldiers of the Western Military District and mass media participated in the event.
Lieutenant General Mikhail Matveevsky, the Head of the Academy, Lieutenant General Sergey Bakaneev and the World War II veteran, the oldest lecturer of the Academy, Colonel Andrey Yepikhin were honoured to unveil the bust.

Everybody emphasized the importance of the event that the bust of the founder of the Academy, Grand Duke Mikhail Pavlovich was installed as it was because of him that Artillery Troops became an important part of the Russian Army, and also they thanked the Head of the Charitable Foundation for such a great present.
Grachya Pogosyan noted that he was glad to participate in the celebratory events of the Academy for the third time and to contribute to its prosperity.
- I am proud to participate in the life of Mikhailovskaya Artillery Academy and I congratulate all the teaching staff, the cadets with the 198th anniversary of its foundation. I wish prosperity, new achievements in preparing commissioned officers and further advancements in reinforcement of military power of the country, - the philanthropist said.
For his attention and constant support of Mikhailovskaya Artillery Academy Grachya Pogosyan was rewarded a medal “Officers’ Brotherhood” by the president of the Foundation of the reserve officers of the Russian Military Forces “Officers’ Brotherhood”, Colonel General Vladimit Zaritsky.

It should be noted that for its almost two-century history more than 90 thousand artillerists and missile men graduated from the Academy. Among them there are 257 holders of the St. George Cross, 95 Heroes of the Soviet Union, 5 Heroes of the Russian Federation, Marshals of the Soviet Union, artillerists, generals, as well as academic figures and cultural workers who gained international acclaim in the fields not relating to the Military Forces.