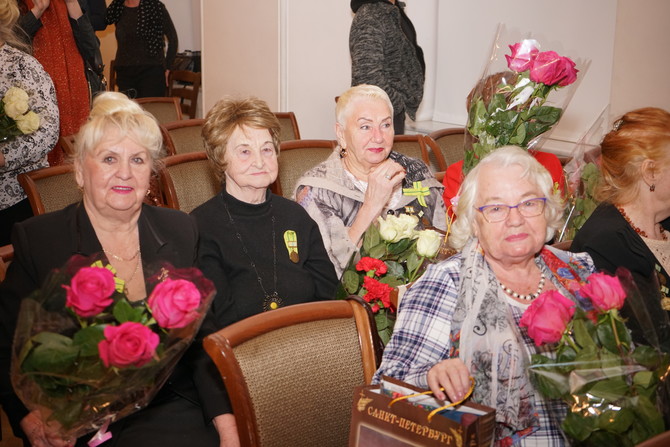 To the Victory of Leningrad

On January 27, our country will be celebrating the 75th anniversary of one of the most important stages of the Great Patriotic War – the complete liberation of Leningrad from the Nazi blockade. There are a lot of various events dedicated to the anniversary held in St. Petersburg and the Leningrad region these days. On January 25, the Armenian Apostolic Church of the Northern Capital honored the veterans of the Great Patriotic War and the residents of blockaded Leningrad.

Veterans, heads of various councils of the Interregional Public Organization of veterans of the War and military service, fellow soldiers and residents of blockaded Leningrad assembled in the cultural center that evening. The Head of the Department of Relations with religious communities of the Administration of the Governor of St. Petersburg Vladimir Ivanov, the advisor of the Vice-Governor of St. Petersburg Arphenia Ter-Minasova, Deputy Secretary General of the IPA CIS Council Hayk Chilingaryan, representatives of the Consulate General of RA in St. Petersburg, various non-governmental organizations of the city, representatives of the Armenian community who contribute to the development of St. Petersburg came to welcome the honoured guests – the main heroes of the occasion.

Of course, there were a lot of those who made it through the Siege of Leningrad and are called “children of the siege”. Among them was Irina Borisovna Skripacheva, Honored Chairwoman of the non-governmental organization “Residents of Blockaded Leningrad” who was one of the originators of the organization having done a lot for its development and active work and who survived through 900 days of the Siege of Leningrad. She was accompanied by Elena Tikhomirova, the present Head of the organization, as well as the chairwomen of the primary divisions: Zhanna Yakovlevna Kiselyeva – Kalininsky division, Nina Yurievna Lebedeva – Vasileostrovsky division, Anna Iosifovna Pavlova – Central division. Galina Nikolayevna Smirnova, Head of the local public organization of military, labour, defence and law establishment veterans of Kirovsky district of Leningrad region came along with the veterans of the district.

It was the first time when former Leningraders Galina Pavlovna Petukhova and Galina Dmitrievna Fedorova could return to St. Petersburg from Yerevan after their evacuation to Armenia during World War II. The meeting with their countrymen in the Armenian Apostolic Church was touching for them.
Svetlana Bolmotova, the host of the event, invited to observe a minute of silence in tribute to those who died during the Siege and then gave the floor to Vicar of the Head of the Diocese of St. Petersburg and North-West region hieromonch Pogos Vardanyan who welcomed the guests and showed gratitude for peace today and gave blessing to the event.

The Head of the Department of Relations with religious communities of the Administration of the Governor of St. Petersburg Vladimir Ivanov addressed the guests on behalf of the Governor of St. Petersburg. He stressed the feat of each veteran, each resident of blockaded Leningrad in liberation of our Motherland from the Nazi and thanked them for what they are doing to keep the memory of the Great Patriotic War, of those days of the siege of Leningrad. He wished them sound health and a long life.

The president of the Charitable Foundation Grachya Podosyan in his turn stressed his great love and respect to the generation that gained peace having noted that he can realize all his charitable projects only because of the moral support that the veterans and residents of blockaded Leningrad provide.

Svetlana Bolmotova spoke about the contribution of the Armenian nation to the Great Patriotic War. She said that more than 500 thousand Armenians were conscripted to the Soviet Army (half of them didn’t return) between June 1941 and May 1945. In total 780 thousand people, representatives of all nations of our Motherland died in the battle of Leningrad.

According to the Who’s Who book of reference “Armenians in the Battle of Leningrad” by Armen Meruzhanyzn and Viktor Kuntarev, 100000 of Armenians participated in the battle of Leningrad, 4000 out of them were volunteers and defenders of the City, 2000 Armenians died defending Leningrad. A lot of Armenians died on Nevsky Pyatachok. In total 20 thousand out of 100000 Armenian defenders of Leningrad didn’t return home. More than 100 Heroes of the Soviet Union came from Armenia, 10 of them defended Leningrad. Among them was twice Hero, a strafer of the Black Sea and Baltic Fleets, Lieutenant Colonel Nelson Georgievich Stepanyan who strafed the enemy troops in the Baltic states and Kingisepp, Mga, Tikhvin in Leningrad region. The name of Ivan Stepanovich Isakov is well-known as it is associated with Leningrad and the Road of Life. Two out of the three famous Armenian Generals died defending Leningrad. One of them was Beniamin Oganesovich Galstyan who was buried in the Alexander Nevsky Lavra.

Then the guests were shown a film describing the monuments and books to memorize the heroes and events of the great patriotic War that had been created and published with support of Grachya Pogosyan and his Charitable Foundation. It should be noted that during the years of his charitable work Grachya Pogosyan has erected, reconstructed, restored more than 100 objects of cultural, historic and spiritual heritage in 11 countries of the world, 29 of them are the monuments connected to the Great Patriotic War, 11 of them are in Saint Petersburg and Leningrad region. The film impressed the guests.

It was noted by the Head the Interregional Public Organization of veterans of the War and military service, fellow soldiers Vasily Gladyshev who awarded Grachya Pogosyan a Certificate of Appreciation in recognition of his loyalty to the veteran movement. The veteran Badim Sergeevich Babikov awarded Grachya Misakovich a Certificate of Appreciation from the Union of veterans of the railway troops of RF and a medal “100th Anniversary of the Military Institute (the Railway troops and Transportation Service)”.

There were a lot of words of respect and gratitude to the veterans and residents of blockaded Leningrad said by Advisor of Vice-Governor of St. Petersburg Arphenia Ter-Minasova, Deputy Secretary General of the IPA CIS Council Hayk Chilingaryan, Colonel General Anatoly Zaitsev.

A dancing ensemble “Nayiri”, a singing group “Avetum” and an ensemble of duduk players – all of them are educatees of the Education Center in the name of the Lazarevs of AAC, St. Petersburg – performed that evening. The young people were welcomed by a storm of applause. Apart from that, the veterans and the residents of blockaded Leningrad were presented with gifts and bunches of roses from the Grachya Pogosyan Charitable Foundation.

Finally, there was a gala dinner where all the guest could share their impressions and emotions, and could congratulate each other with the 75th Anniversary the complete liberation of Leningrad from the Nazi blockade.