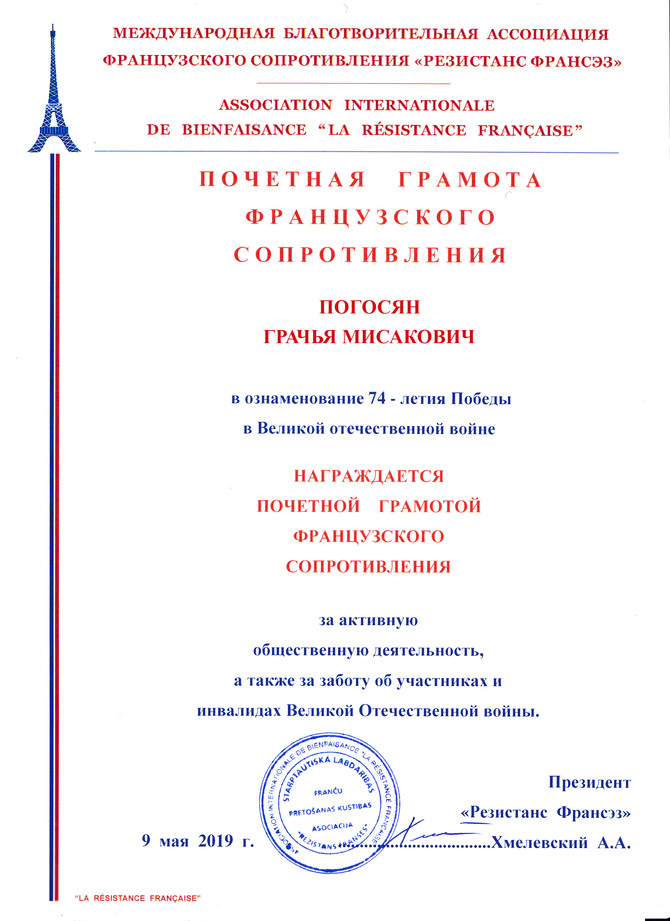 Assistance to the French Resistance

The president of the International Association La Resistance Françoise, the member of the Union of Writers of Russia Alexander A. Khmelevsky contacted Grachya Pogosyan with a request to provide assistance to veterans of the Second World War who fought against fascism on the territory of France at the beginning of April 2019.

It should be noted that Alexander Khmelevsky himself is a veteran of the French Resistance who, by a twist of fate, got to France during the Second World War and struggled against Nazi invaders there. He has been awarded two Orders of the Patriotic War (1st and 2nd Class) for distinguished service in battle, he is the recipient of the Cross of the resistance volunteer combatant (French: "Croix du combattant volontaire de la Résistance") and the Cross of Honour.

As Alexander A. Khmelevsky explained all the funds raised will be routed to targeted assistance to veterans of the French Resistance. He also thanked the philanthropist on behalf of all the members of the Association La Resistance Françoise emphasizing the importance of work the leader of the Charitable Foundation is doing to keep the historic memory as more than 100 objects of cultural and historic heritage have been created and reconstructed in 11 countries upon the initiative and at the expense of the Grachya Pogosyan Charitable Foundation.

NOTE:
The International Association La Resistance Françoise (its members are the participants of the French Resistance and the recipients of the Cross of Honour) was created in 1989 to unite the Soviet soldiers of the French Resistance. At the time of its establishment it united almost 300 people from Russia, Ukraine, Belorus, the Baltic Republics, the Republics of North Asia and Caucuses who fought in France during the Second World War.