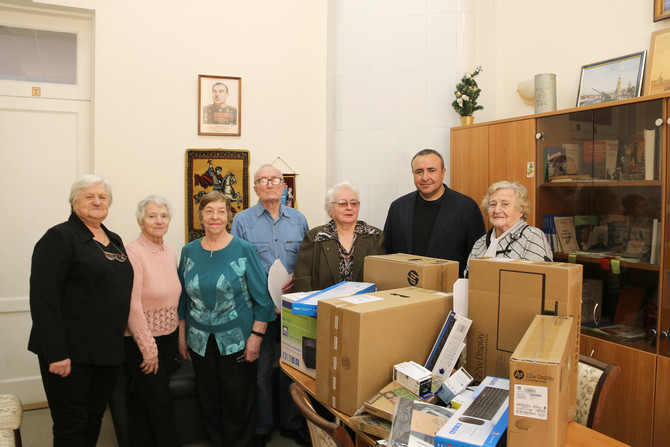 April 4 was a happy day in the public organization “Citizens of Blockaded Leningrad” as the number of their office equipment increased. The president of the Charitable Foundation, the honoured member of this organization Grachya Pogosyan had kept his promise.
It should be mentioned that on the eve of the International Women’s Day, on March 7th, Acting Governor of St. Petersburg Alexander Beglov and some members of the Government came to congratulate women who survived in the Siege of Leningrad. Among them there was the philanthropist Grachya Pogosyan.

During the interaction the women mentioned a number of problems that the organization couldn’t cope with itself. Then Grachya Pogosyan offered to support the Society financially so that the elderly people would be able to use the funds to solve various problems.
Finally, the Grachya Pogosyan Charitable Foundation not only supported them financially, but purchased new computers for more convenient work as well. The equipment was presented and the act of donation was signed on April 4.

The Chairwoman of the public organization Elena Tikhomirova expressed huge gratitude for constant Grachya Pogosyan’s assistance and stressed that a long-lasting friendship with the philanthropist brought a lot of happiness to the members of the organization. In his turn, Grachy Pogosyan pointed out that the support that he provided for the citizens of blockaded Leningrad and veterans of the Great Patriotic War gave him power and strength to realize new projects and filled his heart with warmth and love.