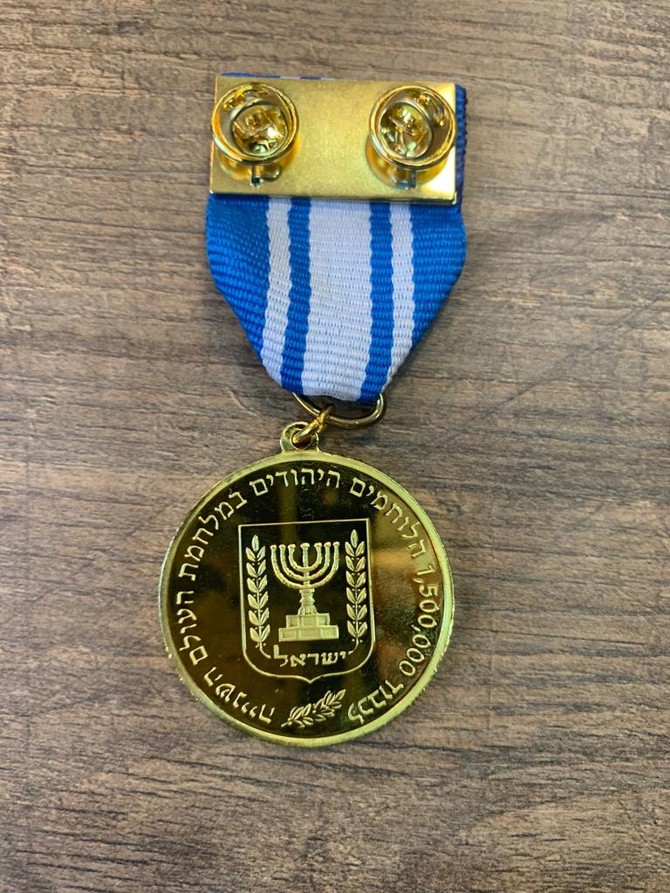 Just before the Defender of the Fatherland Day Grachya Pogosyan got an unexpected and rare present – a special medal of the State of Israel and All-Israel Union of soldiers and partisans – invalids of the War with the Nazi – “70 Years of Victory over Nazi Germany”.

The most surprising fact is that veterans decided to award the philanthropist such a meaningful medal even not knowing him personally. Once they found out about the charity work Grachya Pogosyan and his Charitable Foundation are doing to keep the memory of the events and heroes of the Great Patriotic War, the representatives of the All-Israel Union of soldiers and partisans – invalids of the War with the Nazi considered it important to note his activity in this way. It was decided to present the Medal in Hesed Avraam, the Charity Centre in St. Petersburg on February 21st.

On that day veterans and citizens of the Blockaded Leningrad, visitors of the centre and its staff, friends and colleagues of Grachya Pogosyan gathered together in Hesed Avraam. The guests were welcomed with folk music.

The Head of the centre greeted everybody and said that they were honoured to welcome such an outstanding person in the Jewish centre.

All those who took the floor could outline the image of the philanthropist by speaking about the projects they had participated in which had been realized by Pogosyan.

The Chairman of Tallinn Military Historical Club “Front Line” Andrey Lazurin – a long-standing friend of the Charitable Foundation in cooperation with whom a lot has been done to return the ashes of Soviet soldiers from Estonia, to reconstruct the destroyed memorial plaques, etc. – spoke about the activity and the personality of Grachya Pogosyan.

- This is an outstanding person. Grachya Pogosyan’s work is worth a lot and I don’t know any other person with such a big heart, - Andrey Lazurin said. He also noted his mother – Lena Pogosyan – who brought up her son by her own example of selfless attitude to people around. In the end he passed a Certificate of Acknowledgement on behalf of Ambassador Extraordinary and Plenipotentiary of Russia in Estonia Alexander Petrov for the contribution to work of his fellow countrymen in various fields, to strengthening Russia-Estonia relationships and to keeping the cultural historic memory. He also gave a note of thanks from the Tallinn Society of citizens of Blockaded Leningrad in tribute to the 75th anniversary of liberation of Leningrad from the Siege for keeping the historic memory, his constant attention and support. And he presented a Certificate of Acknowledgement from the All-Russia magazine “Military Archeology” for his contribution to the work led to memorize the people who lost their lives defending the nation.

Hero of Russia, aviation officer Valery Chukhvantsev shared Andrey Lazurin’s opinion.
- One person has a lot of money; another one has a big heart. Grachya Pogosyan is the one with a big heart. He has done a lot to keep the historic memory. – Valery N. Chukhvantsev, who himself had participated in Pogosyan’s charity projects more than once, mentioned.

The veteran of the Great Patriotic War Vadim Bobikov thanked the philanthropist for his assistance to their public organization of veterans of war and military service – fellow soldiers, the honoured member of which Grachya Pogosyan is.

The Vice-Chairperson of the St. Petersburg public organization “Citizens of Blockaded Leningrad” spoke about those monuments in St. Petersburg and Leningrad region that appeared thanks to the philanthropist.

- Grachya Misakovich has been the honoured member of our organization for some years already. The monument “To the Fortitude of Leningraders who Defended the City”, that we had awaited for a long time, could appear thanks to Grachya Pogosyan. Our dream could come true only after we had asked him for assistance to erect the monument. As well as the monument to the children who were killed at Tikhvin railway station during the fascist bombardment on October 14, 1941. Not only the monument was installed, but the obelisk on their burial place was reconstructed. – Nina Yurievna noticed. She briefly mentioned other projects realized by the philanthropist in the city and Leningrad region. Vasily Gladyshin, the Chairperson of the Inter-regional public organization of Leningrad veterans of war and military service – fellow soldiers, confirmed Nina Lebedeva’s words.

It goes without saying that after such a presentation it was clear to everyone what a guest has been invited to Hesed Avraam and that a decent person has been given the award from Israel.

The Head of the St. Petersburg public organization of Jewish invalids-veterans of war Georgy Matveyevich Lerner stressed it in his speech. He handed over the medal on behalf of the All-Israel Union of soldiers and partisans – invalids of War with the Nazi and read a note of thanks: “We express deep appreciation and gratitude for Your initiatives to keep the historic memory. We, Israeli veterans and invalids of the Great Patriotic War, know that thanks to your efforts more than 100 objects of cultural and historic heritage on the territory of 11 states have been created and reconstructed. We were watching as the ashes of our fellow soldiers who liberated Estonia were returned to Russia, to Kazakhstan. We, Jewish soldiers, veterans, invalids, citizens of blockaded Leningrad, prisoners of concentration camps and ghettos, are pleased to see the people for whom help is not an empty word but a matter of honour. Unfortunately, contemporary society lacks mercy, sympathy, compassion and mutual assistance. Thanks to you, Grachya Misakovich, we feel this unity of fraternal peoples who fought against fascism, friendship between nations that has lasted through years and severe hardships of the Great Patriotic War. We, invalids and partisans of the Second World War, residents of Israel, thank you wholeheartedly and wish you health, well-being and peace.”

In his turn, the philanthropist Grachya Pogosyan expressed gratitude for the honour to get the award from veterans of the Great Patriotic War who live in Israel, for warm welcome and kind words.

I am especially pleased that I have got the award from the Holy Land, that my work has been appreciated in Israel. For all of us Israel is a special country – the birthplace of the main religions, - Grachya Pogosyan said. He thanked the organizers of the meeting – the heads of the Charity Centre Hesed Avraam and St. Petersburg public organization of Jewish veterans-invalids of the War for the cordial welcome. The philanthropist also noted the work done in Hesed Avraam to organize pastime of the elderly people and their social support. He presented some gifts to the Charity Centre and the veterans’ organization as well as CDs with documentaries that had been ordered and filmed on his initiative to all the guests.