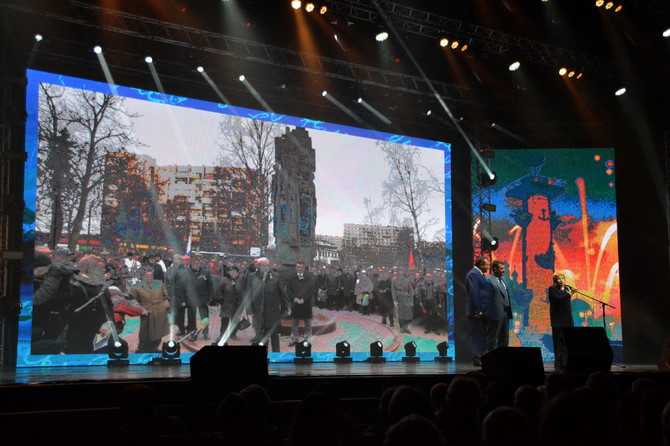 To Have Thanked Publicly

On March 13th there was a gala concert dedicated to International Women’s Day for the women of Kalininsky District in Oktyabrsky Grand Concert Hall (BKZ). Just before the concert started, the award ceremony of Grachya Pogosyan, the St. Petersburg’s philanthropist, was held.
The hall was full that evening. There was Anatoly Drozdov, the Deputy Chairman of the Legislative Assembly, Vasily Ponidelko, the head of the Kalininsky district administration, Zhanna Kiseleva, the head of Kalininsky district division of the society “Survivors of the Siege of Leningrad” and many others who came to congratulate women of St. Petersburg on the 8th of March.
Before the music part started, Vasily Ponidelko, the head of the Kalininsky district administration congratulated the women on the holiday and wished all the best. Then he invited Zhanna Kiseleva and Grachya Pogosyan to the stage. Zhanna Kiseleva spoke about the contribution of the philanthropist to preserve chapters of history of the city and about that valuable project cherished by the survivors of the siege and funded by the Grachya M. Pogosyan Charitable Foundation – the monument ‘To the Fortitude of Leningraders’. We should remind that the monument to tribute fortitude and courage of Leningraders was unveiled on January 26th in Siege of Leningrad Survivors’ Square next to Square of Fortitude (Ploshchad Muzhestva) that is part of both Vyborgsky and Kalininsky districts.
“On behalf of not only residents of Kalininsky district, but of all Leningraders as well I would like to thank you for the remembrance that will stay with us for centuries. This is a real monument of Leningrad which has been awaited for so long. If you haven’t seen it yet, go and watch it,” Zhanna Kiseleva applied the audience.
Grachya Pogosyan expressed gratitude for an appreciation of his activity. “I’d like to thank Georgy Poltavchenko, Governor of St. Petersburg, Vyacheslav Makarov, Chairman of Legislative Assembly of St. Petersburg , Vasily Ponidelko, the head of the Kalininsky district administration, residents of the besieged Leningrad for your support and attention. I’d like to stress that what has been done by me for all these years is done with great love to the cityt and to its history,” the philanthropist said.
The head of the district presented Grachya Pogosyan with a letter of gratitude and a medal from Kalininsky district of St. Petersburg for his great contribution to keep the memory of the feat of the people during the awful day of the siege of Leningrad. He expressed deep appreciation and wished the patron a lot of energy for his further work.
Then the soloist of the Mariinsky Academy Georgy Chernetsov and the band “St. Petersburg weekend”, Natasha Koroleva, Ivan Besedin, Valeria, Intars Busulis and others congratulated the audience from the stage.