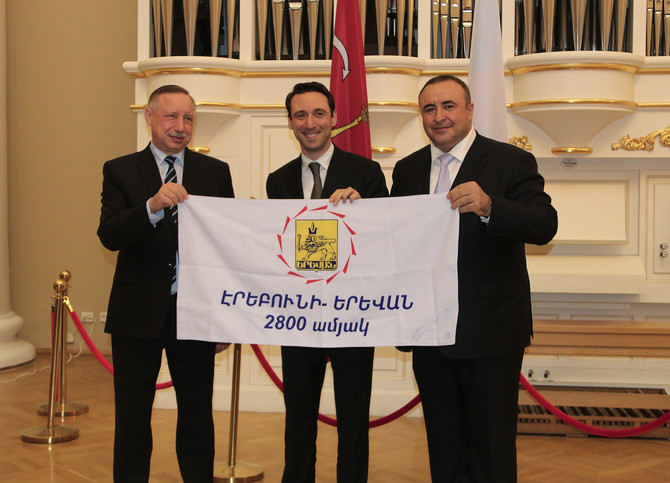 Under the cosmic flag: Days of Yerevan in St. Petersburg

In June 20-21, the Days of Yerevan were held in St. Petersburg. The delegation headed by a new Mayor of Yerevan Hayk Marutyan visited the Northern Capital. Apart from official meetings the guests had an unusual present – the flag which had been taken into space.
Those two days were full of formal business meetings, including an official meeting with the alternate Governor of St. Petersburg Alexander Beglov, some agreements were reached and a number of economic and social projects were discussed.
On their second day of the visit, the guests were invited to Tavrichesky Palace. The meeting had been organized by Armenak Karapetyan, the head of the Mission of Yereven Mayor’s office in St. Petersburg. It was he who took upon himself all the organizational matters to get ready for the visit of the delegation.
The alternate Governor of St. Petersburg Alexander Beglov, Vice Governor of St. Petersburg Anna Mityanina, Deputy Secretary General of the IPA CIS Council Hayk Chilingaryan, Consul General of the Republic of Armenia in St. Petersburg Hrayr Karapetyan with some colleagues, the Director of the Hermitage Museum Mikhail Piotrovsky, heads of relevant committees of the City Administration, priesthood of the Armenian Apostolic Church as well as representatives of the Armenian community of the city participated in the events. Among them there was the president of the Charitable Foundation, the philanthropist Grachya Pogosyan.
In his welcoming speech the Mayor of Yerevan Hayk Marutyan shared his impressions of the visit to the Northern Capital, spoke about how reverently the city and its citizens preserve the memory of their history. He said that he was impressed greatly by the Piskarevsky Memorial Cemetery which he had visited and laid flowers to commemorate Leningraders who lost their lives in the great war. Hayk Marutyan also noted the respectful attitude of the city to the history of its people - there is a monument to the great Armenian composer Komitas on the Vasilievsky Island in Kama Square - since not in every country you will see monuments to the legendary people of other states. And he expressed hope for a long and fruitful cooperation.
Alexander Beglov welcomed all the guests warmly in his turn. He emphasized that in the entire history of Russia and Armenia there have never been any conflicts between our countries and our peoples maintain good relations today.
Then the philanthropist Grachya Pogosyan had the floor. He had a unique gift for the Mayor of the capital of Armenia – the flag of the city which had been into space.
It should be noted that the idea came up to Grachya Pogosyan’s mind in 2017 after his visit to Astana, the capital of Kazakhstan. There he visited the National Museum where he was shown the national flag which had traveled into space on board of the ISS. Grachya Pogosyan liked the story a lot and decided to give a similar present to his Republic – to send the flags of Armenia and Yerevan into space and then present them to the leaders of the country as part of the celebrations of 2800th anniversary of Yerevan and 100th anniversary of the first Republic of Armenia.The initiative was blessed by His Holliness Karekin II, the Catholicos of All Aremenians, was approved by Roscosmos and the North-West division of the Federation of cosmonautics. Under the support of Consul General of Armenia in St. Petersburg Hrayr Karapetyan the flags were officially given to the astronaut, Hero of Russia Oleg Artemyev who took them to the ISS.
On October 7, 2018, the flag of the Republic of Armenia was presented to Prime Minister of Armenia Nikola Pashinyan by the astronaut, Hero of Russia Anton Shkaplerov and the philanthropist Grachya Pogosyan. The flag of Yerevan was waiting for its time to come.
Grachya Pogosyan briefly spoke about it in his speech. He also congratulated everyone with the Days of Yerevan in St. Petersburg and then unfolded the flag of the capital of Armenia. There are stamps of the space mission and the Space Station on the flag, as well as autographs of Oleg Artemyev and Anton Shraplerov to prove its truthfulness.
Hayk Marutyan thanked Grachya Pogosyan for such an unusual gift and assured everybody that the flag would be placed in the City Hall of Yerevan.
The eventful day ended with informal communication in an informal setting.