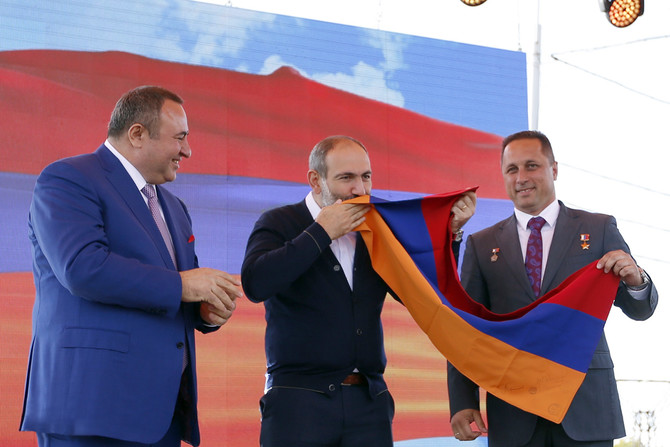 Revival of Agarak and the anniversary of Ararat, the football team, on a cosmic scale

Just before grand events to celebrate the 2800th anniversary of the foundation of the capital – Erebuni-Yerevan – that will be held in the Republic of Armenia at the end of October, a small Armenian village celebrated the 10th anniversary of its revival equally impressively. The Prime Minister Nikol Pashinyan himself came there to participate in the celebration.
FROM MICRO TO MACRO
A visit of top public officials is significant and very important for any city, not to mention a provincial village. Such an event is almost a miracle for it. That miracle was created by Grachya Pogosyan, the philanthropist, the former resident of that village, the present citizen of Saint-Petersburg.
Everything started with a simple idea. A year ago Grachya Pogosyan was in Astana, the capital city of Kazakhstan, on a charitable mission and he visited The National Museum of the Republic of Kazakhstan. There he was shown the national flag that had travelled into space and had been on board of ISS. The philanthropist liked the story and came up with an idea to make a similar present to his Republic – to send the flags of Armenia and Yerevan into space so that on their return he could give them to the leaders of the country when celebrating the 2800th anniversary of Yerevan and the 100th anniversary of the first Republic of Armenia.

Having voiced that idea to Oleg Mukhin, Vice-President of the Federation of Cosmonautics of Russia, Grachya Pogosyan got his approval, and then the cosmonaut Seregey Krikalev, Hero of the Russian Federation and Hero of the Soviet Union, and Roscosmos agreed as well. Before the flags began their long journey, Grachya Pogosyan received the blessing of the Supreme Patriarch and Catholicos of All Armenians Karekin II. After that the Ambassador of Armenia to Russia Vardan Toghanyan and the philanthropist Grachya Pogosyan with the support of Consul General of the Republic of Armenia in Saint Petersburg Hrayr Karapetyan gave the flags to Oleg Artemyev, the cosmonaut, Hero of the Russian Federation, who then delivered them to ISS.

It was decided to present the flags to the top public officials on the day of the 10th anniversary of the revival of Agarak, the native village of Grachya Pogosyan, right before the main state celebrations. An extensive programme had been prepared for that day.

It should be noted that Agarak is a village in the Aragatsotn Province of Armenia with a long history, but as well as in other provincial settlements, the life wasn’t notable there anyway. It hadn’t been till its native and the present citizen of St. Petersburg Grachya Pogosyan having become a high achiever started to support Agarak. The turning point in the life of the village came 10 years ago when in 2008 a new church of Saint Mother of God built by Grachya Pogosayn was consecrated by the Supreme Patriarch and Catholicos of All Armenians Karekin II. The old residents of Agarak called that moment the day of the revival of the village. Since then a lot have been done under the support of Grachya Pogosyan: a new children’s playground has been made, a bell tower has been constructed, the spring has been opened near the new church, the memorial to Warriors from Agarak who died during World War II has been erected and great support has been provided to the local school. Five years ago a monument to the legendary football team Ararat was unveiled to celebrate the 40th anniversary of their double victory in 1973. Its opening took place in front of a lot of guests both from Armenia and Russia, the footballers of Ararat who came from all over the world and the residents of the village as well.

Five years had passed since that event and Grachya Pogosyan decided to gather the guests in his native Agarak.

For the 10th anniversary of the revival of Agarak one classroom of the school was repaired, and it was decided to make it a class of robotics and name it after the first cosmonaut Yuri Gagarin. Elena Gagrina, the daughter of the famous cosmonaut and the head of the Moscow Kremlin Museums gave her permission. Grachya Pogosyan also ordered to create a mosaic icon to Martyrs of the Armenian Genocide to install it next to the church of Saint Mother of God.  The specialists of the mosaic workshop “Tavr” made it with the blessing of the bishop Mkrtych Proshyan. The icon was delivered from the Northern capital and erected on the pedestal created by the sculptor Ashot Davayan. The square neighbouring the monument Ararat-73 was reorganized and it was decided to name it after the famous team. One of the main events for Agarak became the creation of the apparel production which would give the residents the opportunity to earn money. Nikol Pashinyan, the Prime Minister of the Republic of Armenia, suggested an idea at the meeting of the members of the Armenian Diaspora which was held in St. Petersburg in June 2018. Pashinyan addressed the Armenian businessmen to create working places for their fellow countrymen in Armenia.

Everything was ready for the celebration of the 10th anniversary of the revival of Agarak and the people were anxious about the main event – the delivery of the “cosmic” flags.

The airport in Yerevan was crowded on 6 October: hundreds of people came there with placards and flowers to meet an important guest with an equally important weight. And there was something to worry about. The Russian crew of ISS landed only on 4 October and there was little confidence that the long-awaited flags would be delivered to Yerevan in time. And there he was, the cosmonaut Anton Shkaplerov, Hero of the Russian Federation coming out of the central arrival hall. The initiator of this event Grachya Pogosyan introduced the important guest to the people and the journalists. The hall resounded with the applause and camera flashes. The guest was welcomed “with bread and salt”. Everyone was interested if he had brought the flags of the Republic. Anton Shkaplerov demonstrated everybody a carefully wrapped flag of Armenia. When asked to unwrap it, the cosmonaut said:

- Now the flag is hermetically sealed. It was sealed in space and if we open it, we’ll let the smell of space out. So we’ve decided to do it tomorrow. I’ll give the flag to the top public officials so that the cosmic aura spread around in the solemn atmosphere.

The cosmonaut said that it was his first time in Yerevan but he flew around the Earth more than 8 thousand times and he saw Armenia, Lake Sevan and the capital of Armenia from space. According to his words, the flags of only some countries had been into space and for a small country like Armenia it was a remarkable event.
He also said that the flag of Yerevan was still on Baikonur but it would be delivered to Armenia right before the day of the city. He mentioned that the cosmonaut Oleg Artemyev who had taken the flags to ISS would come and give it himself.

When asked to wish something to the Armenians and the citizens of Yerevan, he answered:
- On a cosmic scale 2800 years are just a moment. Yerevan has still a lot ahead, I wish to reach new cosmic heights, new orbits and achievements.

AN EMPYREAN PRESENT TO ARMENIA

The next day, on 7 October, Agarak welcomed the guests with happy faces of the residents, national music, dances and brightly decorated streets. Special guests from all over Armenia, Russia and from abroad came there on that day. Among them there was Ambassador Extraordinary and Plenipotentiary of Russia to Armenia Sergei Kopyrkin with some members of the staff of the Embassy, representatives of the Ministry of Diaspora of the Republic of Armenia, the acting governor of the Aragatsotn Province Anait Sarkisyan, representatives of the Inter-Parliamentary Assembly of the CIS, clergymen of the Armenian Apostolic Church, a number of military officers, sculptors, artists, journalists and residents of the village. A lot of special guests from St. Petersburg and Moscow had been invited by Grachya Pogosyan personally. Among them there was the cosmonaut Anton Shkaplerov, Hero of the Russian Federation, Lieutenant-General Anatoly Zaytsev, an honorary citizen of St. Petersburg, an Honoured Teacher of Russia Larisa Listova, the CEO of the Information Agency “Veteran news” Vyacheslav Kalinin, the chief editor of the independent newspaper “Noev Kovcheg” Grigory Anisonyan, the general director of the mosaic workshop “Tavr” Oleg Kostenko. And, of course, the legendary footballers of Ararat arrived there as well.  So Agarak was welcoming thousands of people altogether. 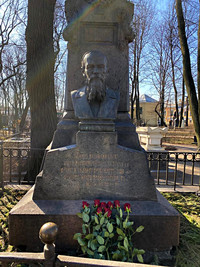 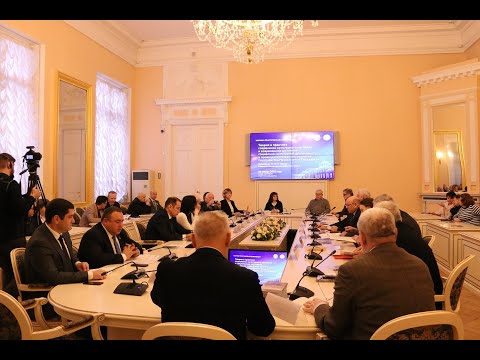